A team of researchers at Glasgow University, UK have developed a portable rapid diagnostic device that could be used to detect a number of conditions, including cancer and cardiovascular disease. Inspired by the famous Star Trek medical tricorder, the research team behind the innovation set out to create a “multicorder” device. 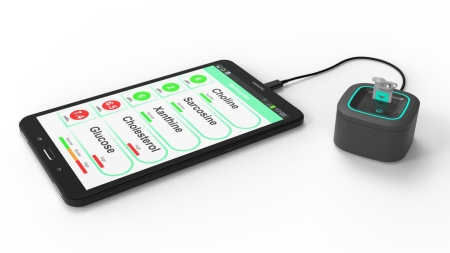 The handheld diagnostic device consists of a fingertip-sized sensor that interfaces with a user’s smartphone. The system uses a low-cost complementary metal oxide semiconductor (CMOS) chip to quantify the level of metabolites in the prepared liquid sample placed upon it. Metabolites are small molecules that act as biomarkers for disease, with perturbations from normal levels indicating a risk of conditions as varied as schizophrenia and diabetes.

Currently metabolites are measured in a laboratory with nuclear magnetic resonance (NMR) and mass spectrometry (MS) systems that are both slow and expensive. The design of the team’s device requires only a drop of prepared body fluid, such as urine or blood serum, and it produces a result in under two minutes. The ease and speed of taking the reading then allows for both rapid diagnosis of disease and long-term monitoring of conditions.

The results of early tests of the device focused on four metabolite biomarkers (choline, xanthine, cholesterol and sarcosine), all of which are associated with heart attack, kidney failure, and prostate cancer risk. The readings made by the device were validated against standard tests for glucose and cholesterol in UK’s National Health Service (NHS) labs and found to be in good agreement. The compact size and rapid, autonomous measurement capability of the device make it an ideal system to widen access to metabolic testing—in both a patient’s home and laboratories in low-income countries.

The device’s inventors plan to further develop the chip to be capable of directly measuring samples without the need for preparation and to dramatically scale-up the number of metabolites measured in each sample.

The research group’s paper in the journal of Biosensors and Bioelectronics: An integrated portable system for single chip simultaneous measurement of multiple disease associated metabolites..

Via: University of Glasgow…